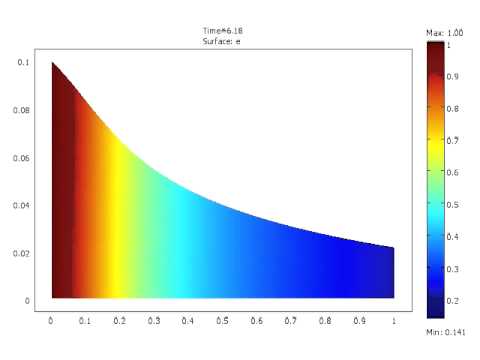 Stretching viscous sheets are encountered in the polymer film industry, e.g. the film casting process, as well as in the glass sheet industry. Classically this problem has an instability called draw resonance, when the draw ratio — corresponding to the ratio of the outlet velocity relative to the inlet velocity — is beyond a critical value. This instability is characterized by symmetric oscillations of both the film thickness and the width of the sheet, as illustrated in the movie above for half the sheet. In this context, we have investigated how the critical draw ratio is non-monotically modified either by strong cooling [2] or by lateral stretching [1]. We also have explored the original idea of stretching viscous sheets by centrifugal forces [3]. Finally we have investigated for the first time the pulling of contact-free films in isothermal conditions [9] and assisted by thermocapillary effects [4,5]. This latter concept was filed for a patent application since it can have an impact on production methods for silicon ribbons used in solar panels.

More recently, we have dressed a complete map of stability for the film casting process including both gravity and inertia effects, where we surprisingly show unconditional stability region in the parameter space [6], the mechanism of which has been unraveled, together with the extension of the stability map for two-dimensional stretching sheets [7] and for fiber drawing (often wrongly referred to fiber spinning) including the effect of surface tension [8].